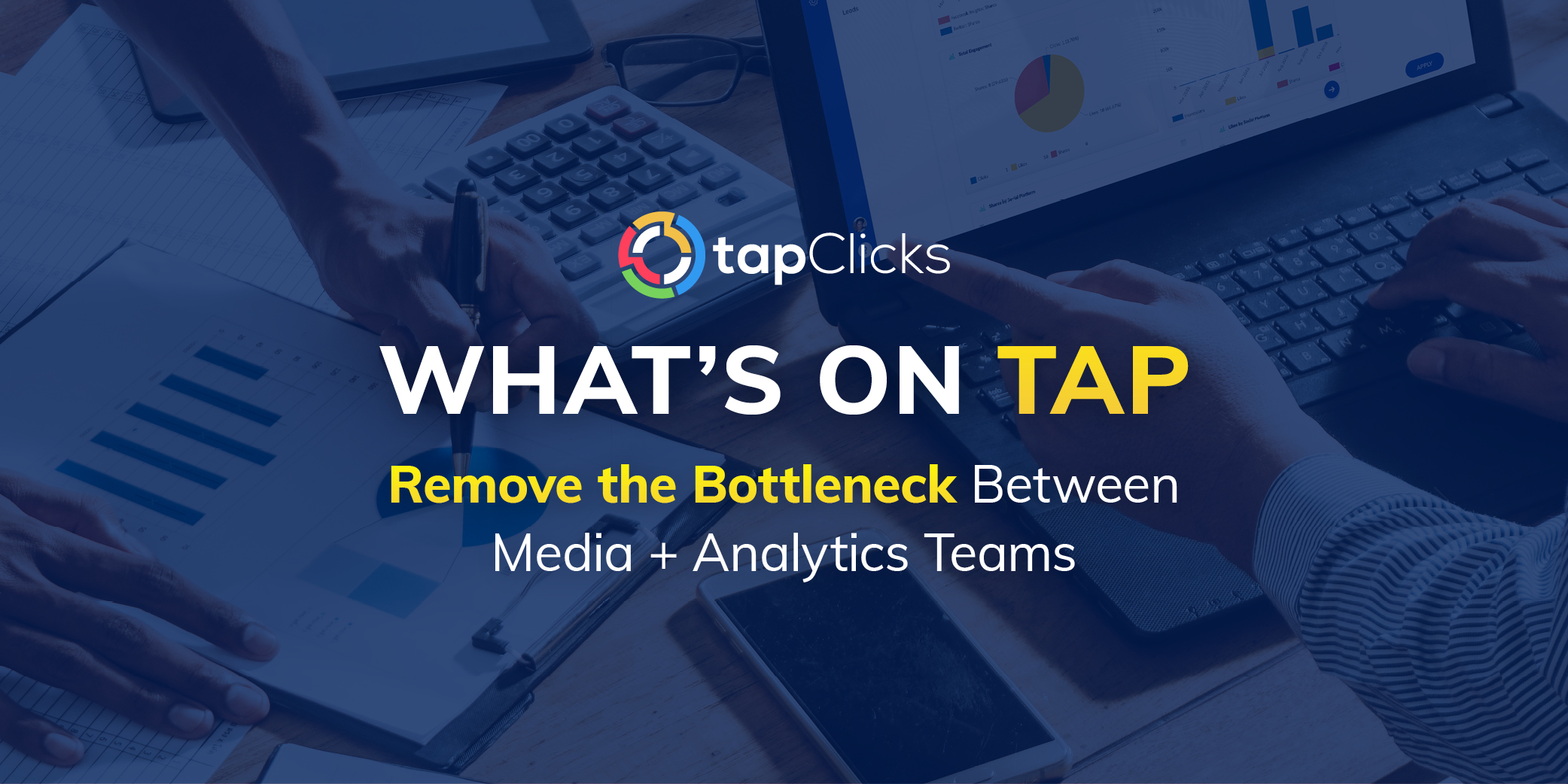 Many agencies find that their analytics team spends a good chunk of their time putting together reports and dashboards for their media team, thus minimizing the time they have to spend on actual data analysis.

This tension is felt equally by media teams, who run on fast, agile decisions to reach their goals. And because they commonly have to rely on a busy analytics team for adjustments to their reports and dashboards, they often find themselves stalled while in pressing situations.

There are a number of problems when this is the status quo:

In this article, we’re going to discuss specific scenarios where agencies suffer from this bottleneck (inspired from situations we’ve heard about from customers over the years). Then we’ll explain the ways in which our marketing operations platform helps to remove friction in agency processes so that media and analytics teams can perform at their highest levels.

Interested in experiencing how TapClicks can remove the bottleneck between your analytics and media teams? Try our 14 day free trial today.

Examples of This Bottleneck in Practice

The following scenarios are examples of situations that media teams experience on a daily basis. For each situation, we describe how things typically play out when they have to rely heavily on analytics (data scientist group, tech dev, etc.) to get these things done. And then we explain what the process is like when these scenarios come up for TapClicks customers.

Scenario #1: When a Client Requests a Shift in Spend Between Ad Platforms and a Quick Report

Let’s say your client calls the media team and wants to shift a portion of spend from Facebook to Snapchat and Yelp. They’ve decided they want to begin testing ads there for a few days, and they want to see a report comparing performance between the three platforms by the end of the week.

Your media team then goes ahead and makes the shift in spend, transferring some of the budget from Facebook to Snapchat and Yelp. They then shoot a message over to the analytics department to give them a heads up that they’ll need a report on how the three campaigns match up by the end of the week.

In addition, whatever time the analytics team takes to create the report is time that wasn’t spent doing the core of their job: data analysis that can inform strategy and serve strategic clients that might be on deadline.

If your agency were using TapClicks, your media team would not only have the ability to make the shift in spend, but they would also have a seamless way to generate the report your client requested.

They would already have a template set up for this client, and they could easily make adjustments to it to show the comparison data. They could then send the report off right from within the platform. Meanwhile the analytics team would be working away uninterrupted.

Scenario #2: When Facebook Updated Their API for the 3rd Time Last Year 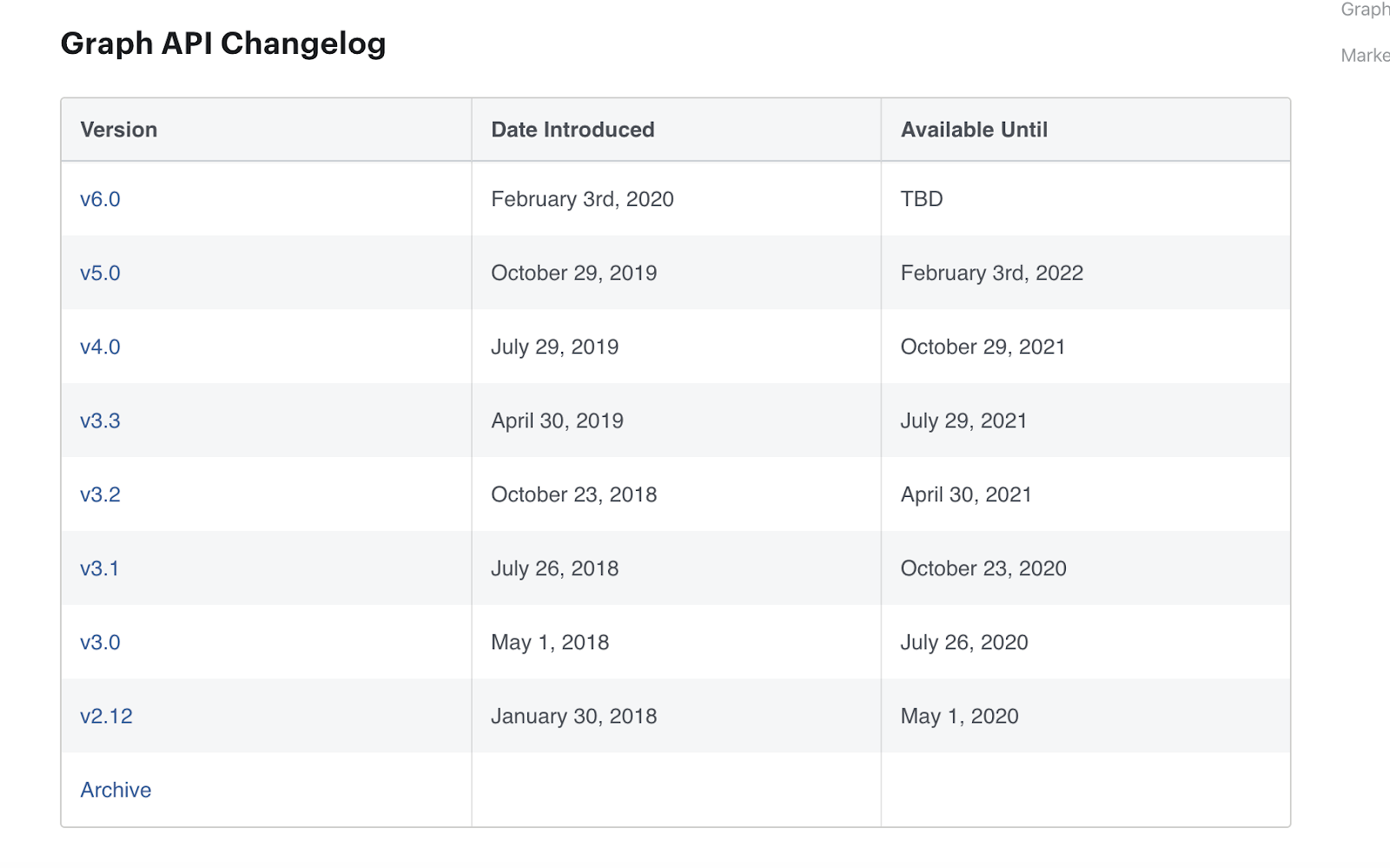 Keeping up with API changes means tracking multiple versions for each data source — which quickly becomes a big task. Most platforms change their API often and rarely notify the people using it.

Facebook alone has multiple dates scheduled for changes to their Graph API (as shown above) and Marketing API, plus “Breaking Changes” as defined by Facebook as: “any changes to existing functionality that will take effect immediately and impact all API versions. These changes can be introduced at any time and will not be tied to a specific release.” While they may have called them Breaking Changes to align with “breaking news” it’s common that these updates break many of the API connections using them.

Your media team just launched a 5-day Lead Ad campaign on Facebook collecting contact information in exchange for a free white paper. They’ve spent days getting the lead magnet ready and setting up a funnel that will automatically ship the white paper to people who submit their information on the Lead Ad and initiate an email series to nurture that new lead.

On Day 1, everything looks great and your team relaxes to let the ad campaign run.

They don’t notice when Facebook quietly unleashes a “breaking change” on Day 2, breaking the connection between your ad campaign and the linked email series. A few days later, when they begin to run the weekly report for this client, they realize that the number of leads in Facebook doesn’t match the number of emails shipped for that series.

The media team now has to manually add contacts for each lead captured to the email series, and your metrics for comparing conversion rates before and after the break are skewed from the delay.

Your media team is now spending a full day to manually scrub the list, plus they need to enlist help from the analysts to figure out how to explain to the client not only why these warm leads were left to cool off before receiving the email series, but how this delay has impacted the ROI for this campaign.

Note: Another situation that we’ve heard comes up is if an agency needs a certain metric added from the client side and the client is using an internal proprietary system, it can take weeks or months for tech resources to update the API.

Shortly after the API breaking change occurs, the TapClicks team is aware and sets out to fix it. The TapClicks connector team is constantly monitoring the integrity of the API connections and even when Facebook neglects to give our team a direct heads up, they hear from 5,000+ other clients in real time when something breaks. We know first and this means API issues are fixed fast.

The same day the API update occurred, our customer success manager sent out a quick notification once the problem was noticed and fixed and your team was able to confirm that everything in your campaign was still running smoothly. Your numbers look great, reporting is clean, and your clients are thrilled with the new leads they received from the campaign.

Scenario #3: When Your Biggest Client Requested Changes to Their Dashboard and Expects to See Changes Implemented Immediately

When an important client requests changes to their dashboard and there isn’t an easy template to use, you’re responsible for building it. This is fine when you have time and warning — the problem is when the report has to be changed on the fly.

It’s rare that clients give us the warning we need. All media is perishable and decisions happen rapidly in an evolving marketplace. And being unable to fulfill this request means you can lose money, and you can lose sales.

One of your biggest clients went through a merger and doubled the amount of data sources you’re responsible for while they work to unify the two brands. You knew they were going through a merger but they had been quiet on how this would impact their digital marketing efforts.

Today, they have asked you to get started with their new data sources right away and want this change reflected in their weekly report in time for their first post-merger all-hands meeting this Friday.

In the new report, the client would like to be able to compare the two entities that came together in the merger as a unit, and separately. This means you need to create a total of 3 new reports by Friday… and it’s already Tuesday.

Because this is an important client and the stakes are high, the media team talks the analytics team into prioritizing this change. They’re overloaded already but they shift their workload around to accommodate.

You get the changes made in time, but at the expense of growing tensions between the media team and analysts, who are now behind on the month-over-month analysis they need to prepare for the board meeting the following week.

This is why the templates and filtering TapClicks offers is so important. Your team can merely add new data sources, pick a template or change the filters, and make these changes themselves without needing to know a programming language or having complex analytics knowledge.

Your client makes the request on Tuesday morning and by Tuesday afternoon your media team has already added the new accounts to TapClicks and is pulling in data that is easily filtered by which business entity they belonged to pre-merger. Meanwhile, your analytics team was working steadily on their MOM report for the board meeting and were done with time to spare.

Ultimately, this is about your ability to empower your media team to get these quick insights themselves.

You have well-paid data scientists for analyzing ROI on sales versus conversion, and doing modeling for the account team to help them with strategy for huge clients. Plus, you want your marketing or media team to be free to operate at the fast clip that makes them successful, agile marketers.

TapClicks helps optimize both of these teams to achieve this balance and avoid the tension that comes from each department trying to work together to grow your business but at different speeds and with different needs.

In case after case we have seen agencies scrimp on strategy because of lack of time or urgent tactical needs that get in the way. We’ve even heard directly from agencies who were so short on time prior to bringing on TapClicks, they had little bandwidth to do any analysis at all.

TapClicks takes the tasks that inform important, urgent tactical decisions for marketing away from your data scientists and empowers your marketing team to handle these things themselves, leaving your data scientists free to dig deep into the numbers that inform strategic decisions. Each team is then empowered to do better, more targeted work in their specialty area.

If you’re experiencing the bottleneck between your analytics and media teams first hand, and you want to solve this problem once and for all, try our 14 day free trial. 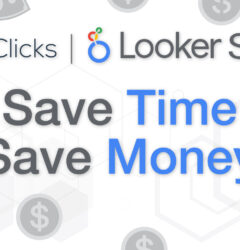 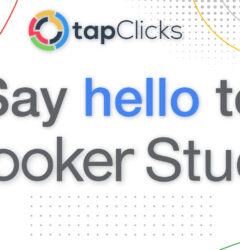 What is Looker Studio and How Can it be Used

What is Looker Studio and How Can it be Used